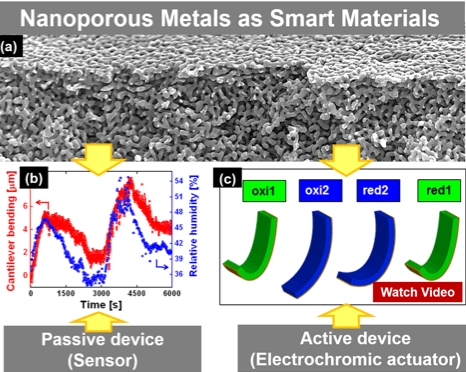 ‘Artificial muscles’ are materials that can mimic the expansion and contraction property of human skeletal muscles upon application of an outside stimulus. Nanoporous metals and their composites represent an emerging class of inorganic artificial muscles.The actuation mechanism in nanoporous metals is based on their electronic charge-induced strain property. Typically, modifying the density of free electrons at the interface of a high-surface-to-volume ratio nanoporous metal gives rise to changes in the surface stress of these materials. Due to the high-surface-to-volume ratio of nanoporous metals, changes in their surface stress induces in turn detectable macroscopic reversible strains of the order of 0.1% (or higher) in their bulk. As such, nanoporous metals are commonly referred to as metallic muscles.[1]
[1] Ray H. Baughman, Science 300, 268-269, 2003. DOI: 10.1126/science.1082270

A video showing these simultaneous changes in dimension and in color is available online on the following link: https://youtu.be/yQjPHs71GLs.