This project is aimed at tailoring the nature and density of catalytic active sites (active facets, terraces, steps) at the interface of nanoporous metals, in order to significantly enhance their electrocatalytic activities toward CO2 reduction, O2 reduction, and N2 reduction reactions (see Figure 1).  We also take advance of the plasmonic properties of nanoporous metals to further enhance their catalytic performance. Some examples of ongoing projects are provided below.
Lead student: Jintao Fu

Figure 1: Investigation of O2 reduction (a) and CO2 reduction (b) properties of nanoporous Au. Nanoporous Au shows outstanding activity towards electrocatalytic reactions, and its activity can be further enhanced via surface engineering.
Lead student: Jintao Fu

As an example of project, here we tuned the electrocatalytic activity of nanoporous bimetallic Au-Ag nanoparticles with composition Au40Ag60at. %, in order to boost its electrocatalytic performance. In doing so, surfactant-assistant facet-engineering was used to enrich the nanoporous nanoparticles surface with (100) facets and terraces. A significant improvement in the electrocatalytic activity of the facet-tailored porous Au40Ag60 nanoparticles was then observed, (see Figure 2) as evidenced by their smaller Tafel plot slope compared to that of pristine porous Au40Ag60 (68 mV/decade vs. 95 mV/decade), and a 48.8 % increase in the limiting current density compared to that of pristine porous Au40Ag60.
Reference: P. Sheng, Z. Wang, J. Fu and E. Detsi, Unpublished 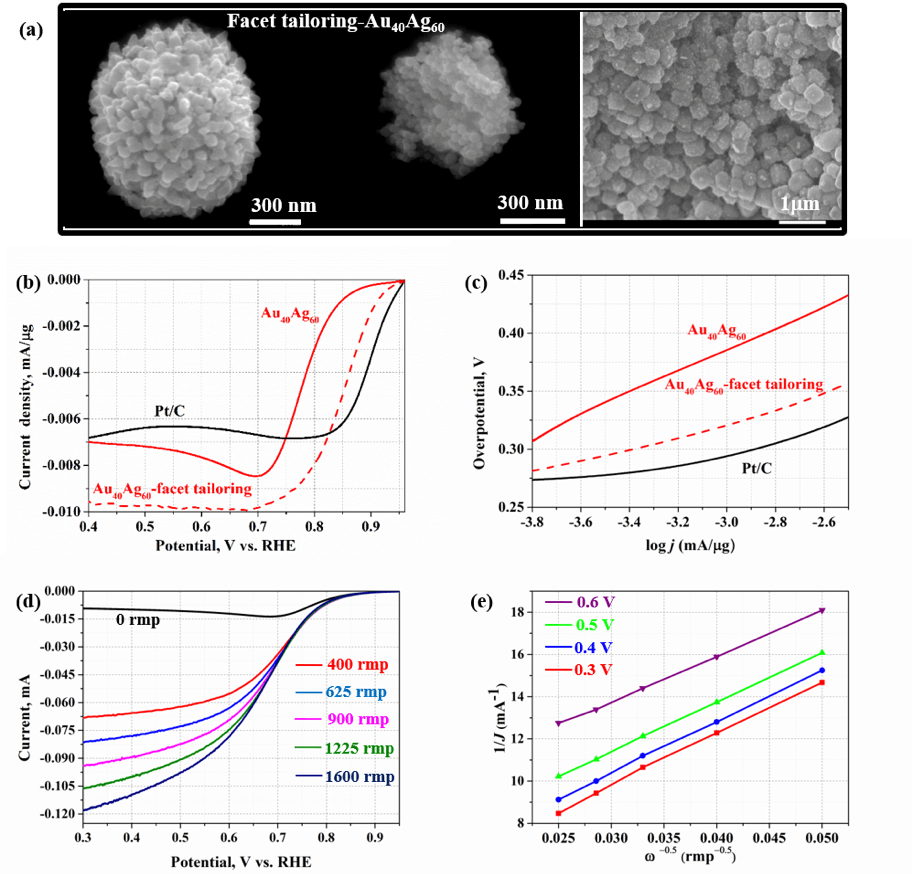 Taking advantage of the localized surface resonance effect to boost the performance of electrochemical cells has rarely been demonstrated using nanoporous metal films as photoactive electrodes. Rather, studies on plasmon-enhanced electrochemical processes use plasmonic metal nanoparticles loaded onto semiconductor or conductor substrates. In this project, we use visible light to significantly enhance the kinetics of a redox reactions. As a proof-of-concept, a 20-fold increase in the electrochemical current density associated with hydrogen evolution reaction on nanoporous Au cathode was demonstrated upon exposure of this nanoporous Au cathode to visible light (see Figure 3). We demonstrate that this significant current enhancement is associated with local heat generated in Au during localized surface plasmon resonance. This concept is exploited to develop high-performance heterogeneous plasmon-induced electrocatalysts based on plasmonic heating, for the conversion of renewable energy resources into fuels and value-added chemicals.
Reference: A. Pröschel, J. Chacko, R. Whitaker, M. A. U Chen, and E. Detsi, Journal of The Electrochemical Society 166, H146-H150,  2019

Figure 3: (a) Illustration of our electrochemical cell configuration. (b) The blue and red curves represent the current densities measured in two different cells. In the absence of light, Al spontaneously dissolves in dilute sulfuric acid and electrons from this anodic oxidation reaction diffuse through the external circuit to the NP-Au cathode where H +is reduced to H2 gas, resulting in a current in the cell on the order of -0.1 mA/cm2. When light is turned on (solid blue and red arrows), the absolute value of this current density increases from 0.1 mA/cm2 to 2 mA/cm2. When the light is turned off (open blue and red arrows), the absolute value of the current density decreases back to 0.1 mA/cm2. (c) Comparison of the photoelectrochemical current density generated by external heat only (red), and by both plasmonic and external heats (green).
Reference: A. Pröschel, J. Chacko, R. Whitaker, M. A. U Chen, and E. Detsi, Journal of The Electrochemical Society 166, H146-H150, 2019