Despite the remarkable key advantages of hydrogen energy technology including the high gravimetric energy density of hydrogen, zero-emission electricity generation using fuel cells, and the high natural abundance of hydrogen resources (particularly in the form of water), a true sustainable hydrogen economy is still not realized. This is partly due to the absence of scalable and sustainable hydrogen production methods, and the absence of effective methods to store hydrogen for specific applications. In particular, over 95 % of hydrogen used worldwide is produced through steam reforming of natural gas, which is not a sustainable method since it heavily depends on fossil fuels, and undesirable CO2 is co-produced during the process. Water splitting by electrolysis, thermolysis or photo-electrolysis represents a promising sustainable method to produce hydrogen. However, the costs of these processes are much higher than that of steam reforming, as illustrated in Table 1, adapted from reference [1]. To overcome the issues associated with sustainable hydrogen production and storage, hydrogen generation by hydrolysis of water-reactive materials for on-board applications (i.e. without the need of storing this hydrogen) has been suggested. For example, upon contact with water, reactive metals such as Al and Zn can produce hydrogen, heat and the corresponding metal hydroxide through the following equations:

Even though the reactions in Eqs. 1 and 2 are thermodynamically favorable, they are self-limiting and do not continually proceed because the metal hydroxide layer (or “oxide” layer depending on the specific reaction conditions) co-produced during the process forms an envelope around the metal surface at the beginning of the reaction. This hydroxide envelope prevents water from coming into direct contact with the metal underneath. The research in the 3DAFSN Lab is aimed at developing scalable air-free processing routes to water-reactive and earth-abundant nanoporous metals for on-board and on-site hydrogen generation by hydrolysis. Some examples of ongoing projects are presented below.
[1] Reference: P. Nikolaidis and A. Poullikkas, Renew. Sustain. Energy Rev. 67, 597 (2017)

The 3DAFSN Lab has developed a sustainable method to produce hydrogen on-board or on-site, which could be used to overcome the two challenges mentioned above. Our approach involves: (i) Air-free selective alloy corrosion route to hierarchical bulk nanoporous aluminum, characterized by the coexistence of both macroscopic and mesoscopic ligament/pore structures, with the mesoscopic ligaments in the range of 10-20 nm. (ii) For the first time, recovery of the sacrificial material simultaneously during selective alloy corrosion, which makes the process sustainable. (iii) Use of this hierarchical nanoporous aluminum to produce hydrogen on-board or on-site with a yield of ~52-85 % by hydrolysis with “pure” water, without incorporation of any catalyst or reaction promoter in the aluminum-water system (See Figure 1).
References:
Eric Detsi and John S. Corsi: United States Provisional Application No. 62/644,972 (March 19, 2018)
J.S. Corsi, J. Fu, Z. Wang, T. Lee, A. K. Ng, and E. Detsi; ACS Sustainable Chemistry & Engineering 7, 71311194-11204 (2019)

The sale of value-added byproducts from hydrogen-generating reactions is a strategic approach to lower the costs of hydrogen fuel in realizing a truly sustainable hydrogen economy. Metal hydrolysis is a chemical process that produces hydrogen together with a metal hydroxide species; however, this reaction is rarely observed without chemical additives or extreme reaction conditions. In this project, we investigate the transformation of Al(OH)3 hydrolysis byproduct (Al(OH)3 is co-produced with hydrogen by hydrolysis of nanoporous Al) into valuable materials to elucidate strategies in reducing the overall cost of hydrogen. The current focus is to demonstrate (i) that the synthesis of hierarchical nanoporous aluminum is scalable to meet the needs of large-scale production for a hydrogen economy (see Figure 1) and (ii) the transformation of the Al(OH)3 hydrolysis byproduct to create high surface-area “activated alumina” (Al2O3) as a commercially viable product (see Figure 2).
References: T. Lee, J. Fu, V. Basile, J. Corsi, Z. Wang, and E. Detsi, Unpublished. 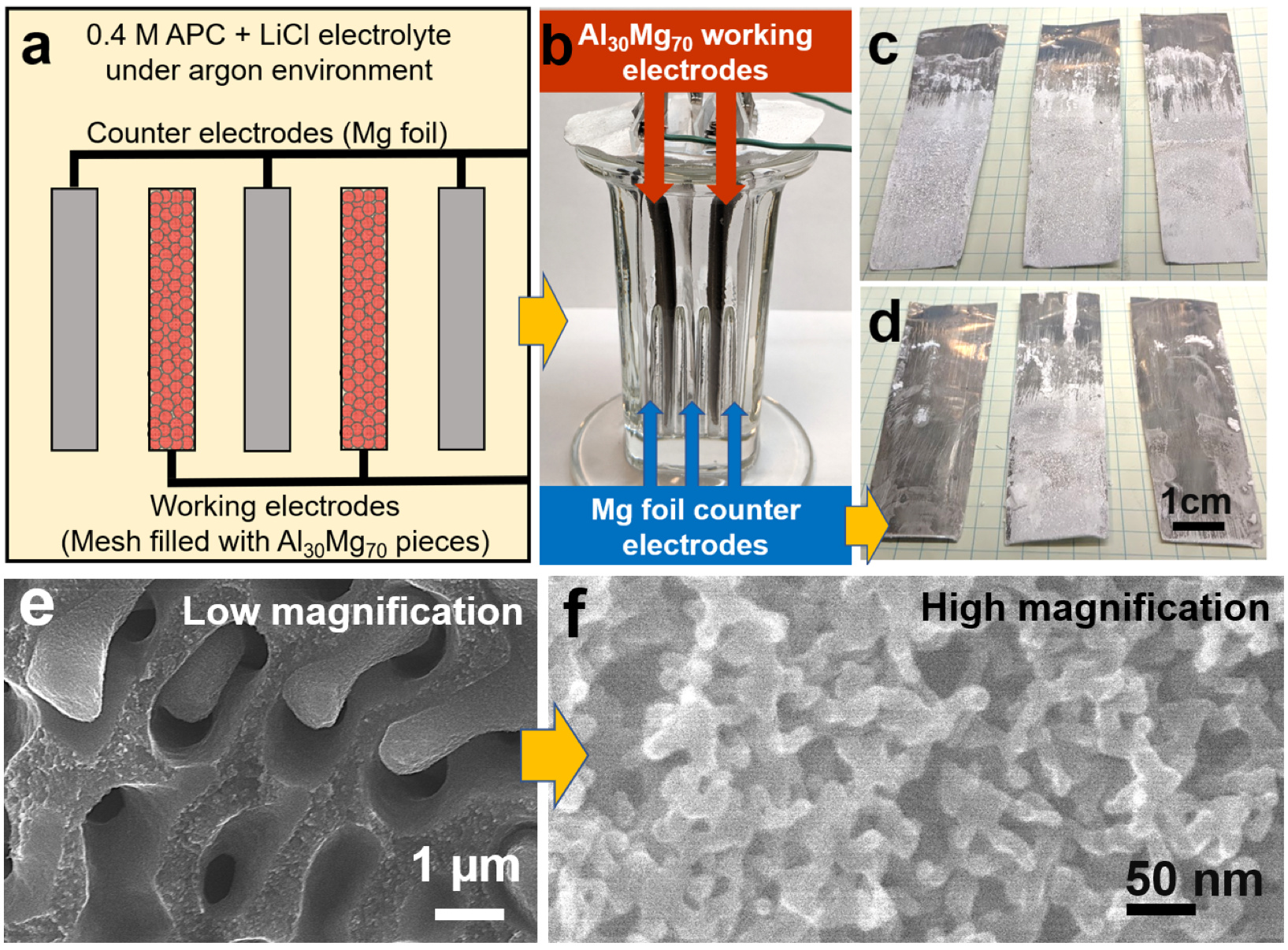 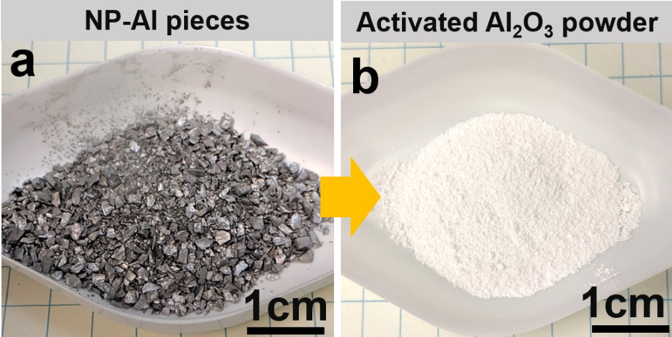 This project is aimed at bridging the gap between fundamental Materials Science research and applications, with the focus on alternative energy resources and technology. Although we have successfully demonstrated at the lab-scale, the generation of hydrogen by hydrolysis of nanoporous aluminum in pure water (see video #1), and its applicability for on-board hydrogen generation to feed a toy fuel cell car (see video #2), the feasibility and scalability of this concept for practical applications has not yet been demonstrated. Therefore, the Nanoporous Aluminum Fuel Car (NAFCAR) project is aimed at demonstrating that hydrogen can be produced on-demand, from nanoporous aluminum and water, to feed a 2.4 kW PEM Fuel Cell Stack, and power a Low Speed Electric Vehicle (see Figure 1). This project is currently supported by Penn Engineering, LRSM (space), the Vagelos Institute for Energy Science and Technology (VIPER Program), the University of Groningen in the Netherlands (Collaboration: Jeff De Hosson), and the CleanTech Penn startup Hydropore.